David Ballantyne – “Botanical Gardens on the Big Island of Hawaii” 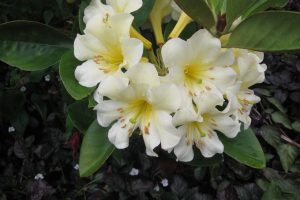 by Sherri Wretham, 23 May 2009 Dr. David Ballantyne has spent his entire life working with plants, beginning in his parent’s greenhouse business in Victoria.  After completing graduate work in horticulture at Washington State and the University of Maryland, he worked at the Agriculture Canada Experimental Farm at Saanichton.   In 1963 he obtained a teaching and … END_OF_DOCUMENT_TOKEN_TO_BE_REPLACED

by Sherri Wretham, 23 April 2009  Dr. Richard Mackie is an award-winning author and historian from Victoria. He worked as an archaeologist for a number of universities and museums, studied mediaeval and modern European history at St. Andrews University, and studied Canadian history and historical geography at the universities of Victoria and British Columbia. Combining his … END_OF_DOCUMENT_TOKEN_TO_BE_REPLACED

by Sherri Wretham and Andrew Bryant, 26 March 2009 Graham Gillespie is a Research Biologist with Fisheries and Oceans Canada (DFO) at the Pacific Biological Station in Nanaimo.  Graham is Head of the Intertidal Bivalve, Cephalopod and Crab Programs, conducting stock assessments for commercially important species, providing scientific advice and participating in ecosystem-level research involving these … END_OF_DOCUMENT_TOKEN_TO_BE_REPLACED

by Andrew Bryant, 26 February 2009  Daniel Francis, together with co-author and long-time Vancouver Aquarium staff member Gil Hewlett, wrote Operation Orca:  Springer, Luna and the Struggle to Save West Coast Killer Whales.  This book was awarded “Best Nature Non-Fiction Award” by Forward Magazine, and has been excerpted in The Tyee, which you can find here. Daniel described … END_OF_DOCUMENT_TOKEN_TO_BE_REPLACED

by Andrew Bryant, 27 January 2009 Bruce Cousens is an independent biologist who works for the Western Purple Martin Foundation (WPMF), a non-profit charity based in Nanaimo. Bruce has worked with Purple Martins (Progne subis arboricola) since the mid 1980s, when he began to help construct nest boxes for this species, which is listed as a … END_OF_DOCUMENT_TOKEN_TO_BE_REPLACED

by Sherri Wretham, 27 November 2008 Karen Needham is Assistant Curator of the Spencer Entomological Collection, which is hosted by the Beaty Biodiversity Museum at UBC in Vancouver. She spoke about the tremendous diversity of “bugs”, or more formally, arthropods.  She explained the differences between the “true bugs”, which includes leafhoppers and cicadas (the order Hemiptera), ants … END_OF_DOCUMENT_TOKEN_TO_BE_REPLACED 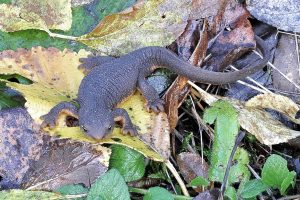 by Sherri Wretham, 23 October 2008 Rick O’Neil spoke to us about the ecology and natural history of newts and salamanders. 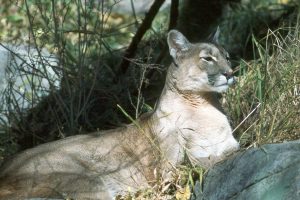 John Kelly – “Cougars” by Sherri Wretham, 25 September 2008 John Kelly works as a Wildlife Biologist for the Fish and Wildlife Section based in Surrey.   He spoke to us about cougars, including their behaviour, ecology and interactions with humans.